It is one of the most inspiring stories of all time, and this weekend, residents will have the opportunity to see it live on stage.
“The Miracle Worker” will be performed Aug. 4-6 at 7 p.m. at the Montgomery County Performing Arts Center in downtown Winona. Tickets are available in advance or at the door.
For Co-director Paula McCaulla, this is one of her favorite plays, and she is so excited to bring it to life at the MCAC.
“I have always been fascinated with the life of Helen Keller; so many blind, deaf and mute people were not able to overcome such disabilities,” McCaulla said. “Anne Sullivan was Helen’s Miracle Worker. It is also a bittersweet story for Kate Keller, Helen’s mother. She realizes when Helen begins to make the connection between spelled words and objects that she will no longer be the most important person in Helen’s life; it will now be Anne Sullivan!” 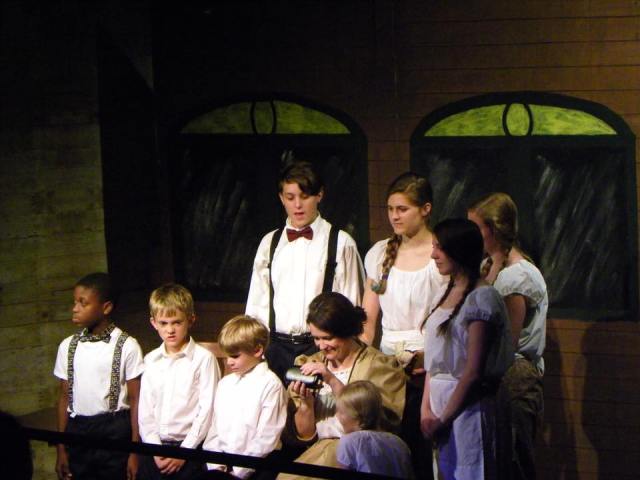 McCaulla said whenever she reads a script, she visualizes the character. As she reads further, that character takes on the identity of a person.
“I visualized the roles of Captain and Kate in the persons of Arnold Dyre and Reba Bailey,” McCaulla said. “To my great sorrow, Arnold passed away just a week after rehearsals started. Steve Bailey, Reba’s husband, offered to take the role of Captain Keller. I had no conception of who would play Helen or Annie, until my daughter Beth Richards called and said that she and my eleven year old granddaughter Lacey might come down from Ohio to audition for the play. In my mind the perfect ensemble was in the making.”

At auditions, McCaulla said Austin Prudhomme fit the role of James Keller to perfection, and of course, Bootsie Weed is the personification of Aunt Ev. McCaulla said Kerri Hayes, her son James and Ah’kerria Newman were perfect for the parts of Viney, Percy and Martha and Wilton Neal is the perfect doctor in the open in the opening  scene. McCaulla said Nathan Robbins was helping on the set for the summer show when it dawned on her that he would be a fantastic Anagnos, Annie’s teacher at the Perkins Institute for the blind.
“I wanted to actually portray the offstage voices of Little Jimmie and Young Helen,” McCaulla said. “Thomas Rosamond and Destiny Kelly fill those roles to perfection.”
The crones from Annie’s days at the Tewksbury institution are eerily played by Carolyn Swanson, Stevie Myers, Phyllis Minga and Lee Ann Martin.
Parker Stewart plays the roles of the superintendent of Tewksbury and Dr. Howe, an expert in the education of the blind.  The blind school students are played by Gracie Kilburn, Abby Robbins, Neely Prudhomme, Addie Wade, Ben Rosamond, Aidan Kilburn, Corbett Vance, Max Bailey and Tylandis Newman. Rounding out the cast is Antonio Washington, who plays John, the stage hand who is actually a part of the action on stage. 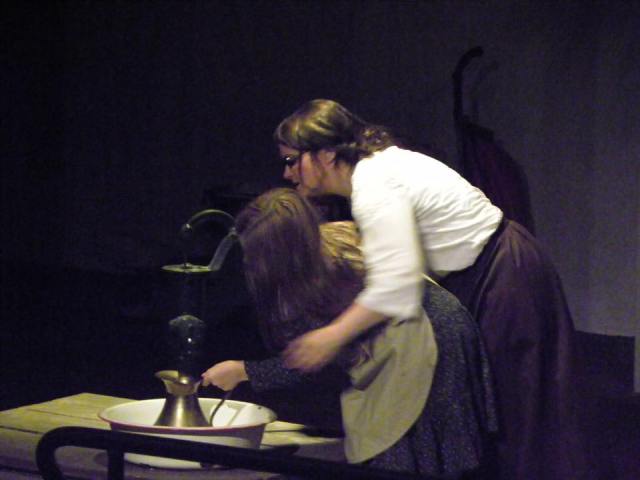 “In my mind, it is the perfect cast for this show, McCaulla said. “One would never know that Lacey Richards is making her stage debut in this show.”
Other newcomers to the MCAC stage are Steve Bailey, Kerri Hayes, Destiny Kelly, Lee Ann Martin, Nathan Robbins, Abby Robbins, Parker Stewart and Antonio Washington.
“I could go on and on about the set crew,” McCaulla said.  “Steve Bailey and Antonio Washington have done an amazing job in adapting the stage to achieve my vision. Nathan and Abby Robbins have  with platform building and anything I ask of them.”
In her first Co-director position, Cristina Russell is loving the opportunity to learn the behind-the-the-scenes work.
“I love The Miracle Worker, because it tells the story of being lost and found,” Russell said. “Helen is obviously lost in her own little world without sight and sound. Annie is lost in our world.”
The thing I love most about the Miracle Worker is it tells the story of being lost and found. Helen is obviously lost in her But at the end, with one little word everyone is miraculously found!”
Russell has been so excited to learn more about directing community theatre. She has been part of the theatre programming with MCAC for several years, and she is excited about her duties as co-director.
“Ms. Paula has been an angel with this whole production, and I thank her for allowing my creative input on this play! I run rehearsals with her watchful eye and I have helped some actors one on one including Beth (Annie) and Lacy (Helen). Ms. Paula truly cares about my input about the play.”
Russell’s whole family is in the play, including both parents, both brothers, her sister-in-law, her boyfriend, and her dog.
“I want to do more in my community and theater is a dying art,” Russell said. “I love being a part of the team that is keeping it alive!”
For more information about the show or purchase tickets in advance, call (662) 417-3429.