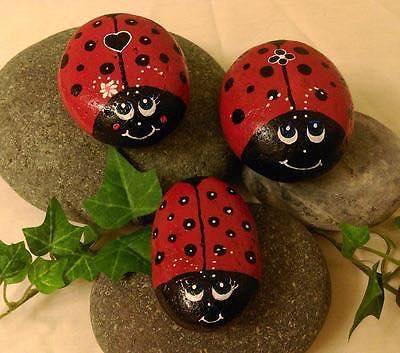 It began about three months ago when Sherrie Palmertree found a painted rock on the window ledge of Hobby Lobby in Olive Branch.

She had read about the rock painting craze in larger communities and was so excited to find her first painted rock.

“I screamed with excitement,” Palmertree said. “I scared my friend that was with me she thought something was wrong. She had not heard of this craze.”

When she returned home to Winona, Palmertree looked the page up that the rock belonged to and began reading. She decided this was something fun she wanted to do with her grandkids in Winona this summer.

Three months later, the Facebook group, 662 Rocks Winona has received 1,000 likes and hundreds of comments and photos of local people painting rocks, giving clues to where the rocks are hidden and photos of people finding rocks. Most found rocks are re-hidden within the community to keep the fun going. While some people may keep their found rocks as souvenirs, most are back in the community for someone new to find them.

“Anyone can join in on the fun,” Palmertree said. “This is a huge craze all over the world. I’m loving it. I mean who would think a rock could make someone’s day? It takes so little effort and not expensive at all to do. I’m hoping more people get involved and making it a big thing here.”

This “kindness” project, as Palmertree calls it, is an opportunity to spend time with the family painting rocks and gets the family out looking for the clues. Those painting rocks are asked to put the facebook group information on the back of the rock so people can post that the rock has been found, or re-hidden. Occasionally, there are a few themed projects, just like on July 3, the word “peace” was to be put on all rocks that are hidden that day in an effort to bring “peace” all over the world on National Drop a Rock Day. Palmertree said this kindness project couldn’t keep going if it weren’t for the great people in the surrounding areas.

“I’m just like a child when it comes to doing this,” Palmertree said. “Young and old alike can participate and enjoy hiding and finding them. I’m thinking of maybe having a rock swap one day. It is such a fun, artsy project for kids and senior citizens for the summer….I guess all year-long, in Mississippi!”

In the winter when it’s too cold to get out or it’s raining, Palmertree suggests painting a batch of rocks and have them on hand when you do get out and about. One of the main rules is not hide the rocks anywhere it would pose a threat to anything or anyone. And before hiding inside a business, please make sure it’s permitted. Use your own judgment to gauge if the rock can be seen and easily accessible.

“Its fun for all ages,” Palmertree said, and that is how the craze has gotten started in Winona. 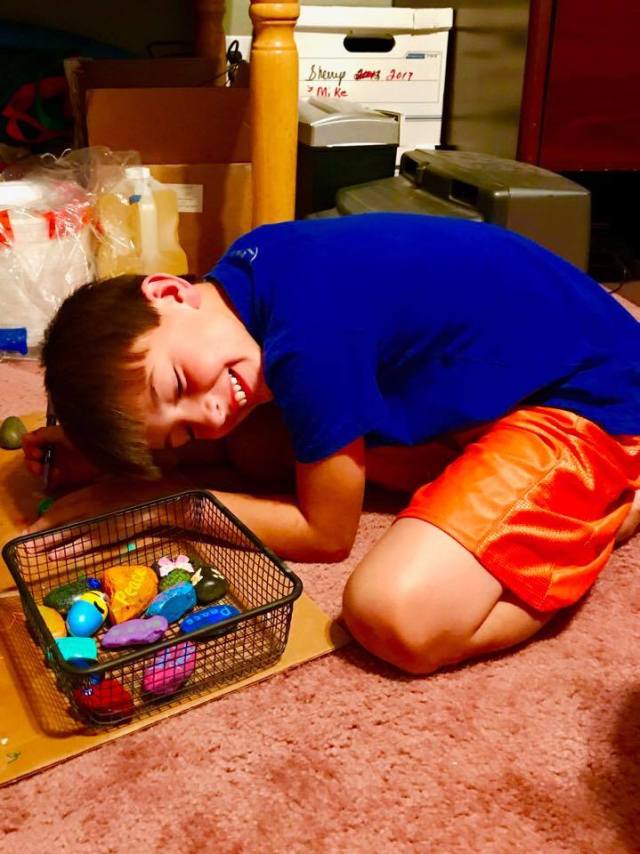 Grandson, Logan Dover, 9, with some of the rocks he has painted this summer. (Photo submitted)

When school let out for summer, Palmertree was babysitting four of her grandchildren. On day two of summer break, they were complaining about being bored. She took them all out on the deck with some paint, brushes and rocks and asked them to be creative.

“They loved this idea,” Palmertree said. “It is exciting to paint them, hide them and see who finds them. I can’t draw a stick man but it doesn’t matter. Say for instance someone having cancer treatments finds a painted rock that reads ‘you are loved.’ Would that not brighten your day? I just want to spread happiness, smiles and put some good in this world of bad.”

Palmertree said she thinks this would be a good project for residents of nursing homes, patients in the hospital–especially in the children’s hospital such as St. Jude, and local libraries.

“I mean the possibilities are endless,” Palmertree said. “You can even put the location of bible verses on the rock like John 3:16. You can use fingernail polish as paint, glitter. You can buy rocks from Lowe’s, Home Depot, Hobby Lobby, Walmart, and other home improvement stores. I take my rocks to hide with me everywhere I go. I hide rocks everywhere. If I’m lucky enough to find rocks from a different area I keep at least one for my collection as a souvenir, so to speak.”

Palmertree said she has plans to paint a few rocks with cancer awareness ribbons on them.

“I’m a big advocate for cancer awareness,” Palmertree said. “I’ve lost a lot of family and friends to cancer, one being my mom at 36 and I just want to spread ‘awareness’ if you will.”

She hopes locals will “see some good in this and the excitement and smiles that come from it.”

“I’ve learned that you don’t have to be artistic to create a beautiful piece of art that brings joy to someone’s heart,” Palmertree said. “I’ve even hid and watched as someone would find a rock and just to see the expression on their face is priceless. It’s joy all the way around.

Palmertree said she hopes someone from out-of-state or country will find one of the Winona rocks and take it back home and start the movement in their own community.

If someone would like to start this craze in their hometown, just do what Palmertree did: create a page, get members, paint, hide and find.

“There are a lot of different products out there to use,” Palmertree said. “I use acrylic paint and sometimes puffy paint to paint with, you can use embellishments glued to the rock, inspiring words, I like to do some in memory or in honor of someone. You can use paint pens. I also use a clear sealant to seal my rocks to prevent them from becoming weathered. The ideas are unlimited.”

Angie Starnes said she first heard about painting rocks about a year ago from a group in Florida. She painted and hid a few rocks, but nothing came of it. But about two months ago, she joined 662rockswinona Facebook group. She said due to working long hours, she has not had the opportunity to do as much as she would like, but enjoys seeing others creativity.

“I love crafts so painting something was definitely ‘down my alley,’” Starnes said. “It’s really an inexpensive hobby because you can hide and hunt on the way to the grocery store or wherever. The elderly and the school children are really loving it, but you can’t help but become addicted at any age.”

Starnes says it “puts a smile on your face to find one.” Starnes said she has hidden rocks all over the area, not only in Winona, but Kilmichael, Stewart, Eupora, Louisville and Mathiston.

So, always be on the look out, a 662 Rock Winona can be found anywhere, and that’s part of the fun!

Join the fun by first asking to be a member of the 662rockswinona Facebook page, then get some rocks and painting supplies and get started painting rocks, hiding and finding rocks. You never know where you may see one in the community, but if you need a hint, find it on the group page.