This Christmas, Rev. Gary Anglin is working to create a special holiday tradition at First Baptist Church of Winona.

A tradition that started with Anglin many years ago at Belhaven, will now be part of this year’s must-see Christmas experiences in Winona. 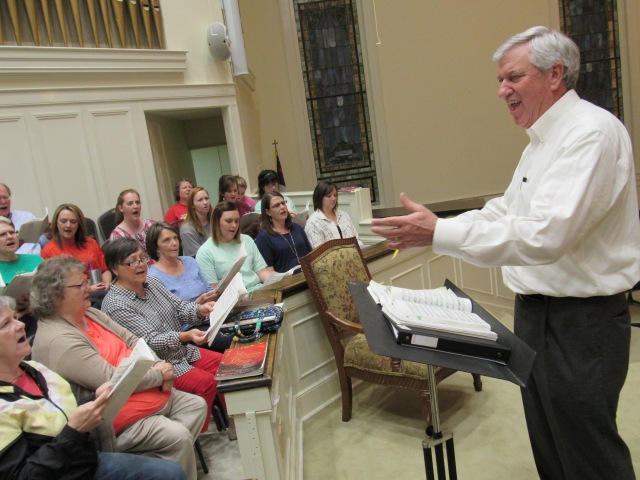 “The Singing Christmas Tree is truly a church wide effort and one special event that everyone will be talking about long after it’s over,” Anglin said.

The FBC Winona choir and soloists will be accompanied by an orchestra consisting of a full brass, wood winds and rhythm section along with keyboardists, Hattie Bourne and Betty Love who are regular accompanists for the choir.

FBC Winona’s pastor, Rev. Dr. Tim Mims, along with their youth pastor, Rev. Justin Anderson, and their wives, will also be part of the choir for this special event.

According to Anglin, one of the unique elements with this particular tree is the beautiful lights that make up part of the decorations.

“The program will virtually include a light show which is so thrilling to children of all ages,” Anglin said.

The Singing Christmas Tree has been part of Anglin’s music ministry for many years, but this is the first year he will be bringing this special event to Winona.

Many years ago, Anglin attended Belhaven’s Outdoor Singing Christmas Tree and feel in love with the music and the ministry of the event. And although he loved it, he nearly froze to death. He began making plans the following year to construct a tree and putting it inside Alta Woods Baptist Church in Pascagoula where he was serving as music minister at the time. Alta Woods Baptist had the capability of holding the structure for a Singing Christmas Tree that would hold 100 singers. That tradition was kept for nearly 25 years, long after Anglin had left to serve as a music minister at First Baptist Church in Pascagoula.

Anglin revived the Singing Christmas Tree event in Pascagoula and they performed it until his retirement in 2011.

Since Pascagoula is no longer doing a singing tree event, Anglin asked and was graciously given consent to borrow their tree structure for use in this year’s production in Winona. Built along the same measurements as the first one he built at Alta Woods Baptist in Jackson, the Singing Christmas Tree at FBC Winona will be holding 60 to 65 choir members.

While it has not been featured in every church he has served, The Singing Christmas Tree has been a very prominent part of his Christmas tradition. And because he is so passionate about this event, he wanted to make it a special event for his hometown.

Winona and Kilmichael have always held a special place in Anglin’s heart. Even though he lives in Richland, Winona and Kilmichael will always be home. And now, serving as the part-time minister of music at FBC Winona, he can live out his own version of the 60s television comedy, “Green Acres.”

Anglin was born in the old Winona hospital 70 years ago. His parents were both from Montgomery County, but moved a lot until Anglin was 12 years old when they returned to the Winona area. In 1963, he graduated from Winona High School, then attended Mississippi College to study music with the goal of becoming a church music director.

He received a bachelor of Music Education degree and taught for two years at Bailey Jr. High in Jackson.

“But in my heart I knew I was called to church music,” Anglin said.

He and his new bride, Barbara Hawthorne of Richland, moved to Fort Worth, Texas to attend Southwestern Baptist Theological Seminary, where he studied church music for two years.

Still wrestling between church and teaching, Anglin transferred to The University of North Texas, (one of the finest music schools in the country) and received a  master’s in music education, with an emphasis in voice, which he describes as his “major instrument.”

Again, wrestling between education and church, Anglin accepted a call to First Baptist Church of Abilene, Texas and served there for 10 years. In 2000, we were called back to FBC Pascagoula where he served 10 more years before retiring in 2011.

“We were in Pascagoula during Katrina where I experienced my most significant ministry and found resolution and great peace and why I had never been able to give up being a minister of music,” Anglin said.

It was also during this time that Anglin’s parents passed away and left him and his sisters, Karen Willingham of Winona and Andi Adams of Meridian, a farm and house at Poplar Creek, outside of Kilmichael.

“My wife and I bought the farm (so to speak) from my sisters and also bought my wife’s’ family home in Richland,” Anglin said. “We have the best of both worlds and enjoy being at the farm and taking advantages of city life as well.”

And while they are enjoying their “Green Acres,” Anglin accepted the call to serve as the part-time Music Minister at FBC Winona. He and his wife have the opportunity to enjoy the homes of both of their parents, and all of their friends in between.

And Anglin is excited to bring this special event to his new ministry calling at FBC Winona. He hopes it will be a blessing to all who hear and see it.

“Our choir is so blessed to have Gary as our director,” said Priss Ferguson, choir member at FBC Winona. “He encourages us to learn and do our best as we lead in worship. The Singing Christmas Tree is a big undertaking for us. We are so excited for this wonderful opportunity to share the birth of Jesus. Gary wants us to bring glory to God with all of our music.”

There is no charge for the Singing Christmas Tree program, but seating is limited. For individual and group seating, call the church office at (662) 283-4682 during regular work hours to secure a seat. Specify the date you plan to attend. Tickets can be picked up at the church office or from choir members. Those holding tickets will be admitted first.

This article was featured in the November 17, 2016 edition of The Winona Times.