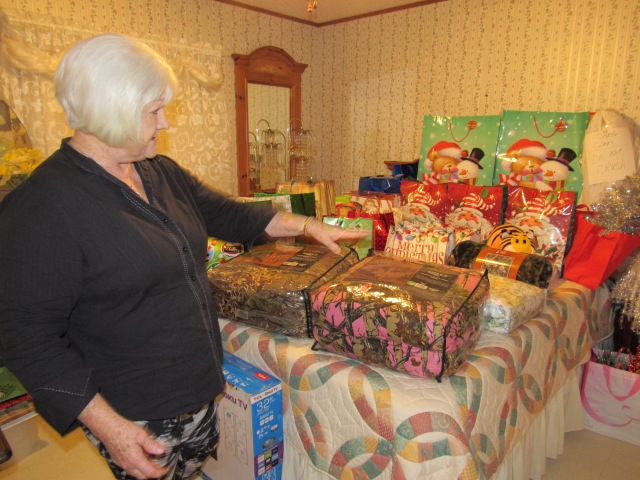 Mary Lee Browning shows some of the items she has purchased as gifts and door prizes for the Veteran’s Christmas Party (the Browning Party) event at the Memphis VA this Saturday. (Photo by Gwen Sisson)

It began as a labor of love. And now, the Browning Christmas is a special tradition at the Veterans Administration office in Memphis, Tenn.

Mary Lee Browning created this special Christmas Party to help veterans during the holidays after her son, Tracy Browning, became a paralyzed veteran at the age of 21. He is now 44. Tracy was injured while serving in the U.S. Air Force, stationed at Offut Air Force Base in Omaha, Neb. Tracy became a member of the Paralyzed Veterans of America and served as the Mississippi Liaison Officer for several years.

The main office for the Mid-South Paralyzed Veterans is located in the Veteran’s Administration (VA) Hospital in Memphis, Tenn. The VA Hospital in Jackson does not have a spinal cord unit, so veterans from Mississippi who have been wounded in Iraq and Afghanistan are sent to the Memphis VA.

“That is why this Christmas Party is held at the Veterans Hospital in Memphis,” Browning said. “But I do include all Veterans that come to the party, not just the paralyzed Vets.”

And this Saturday, Dec 3, the tradition continues. The Paralyzed Veterans Organization will prepare a special Christmas luncheon and the “Browning Christmas” (as the veterans call it) will follow. 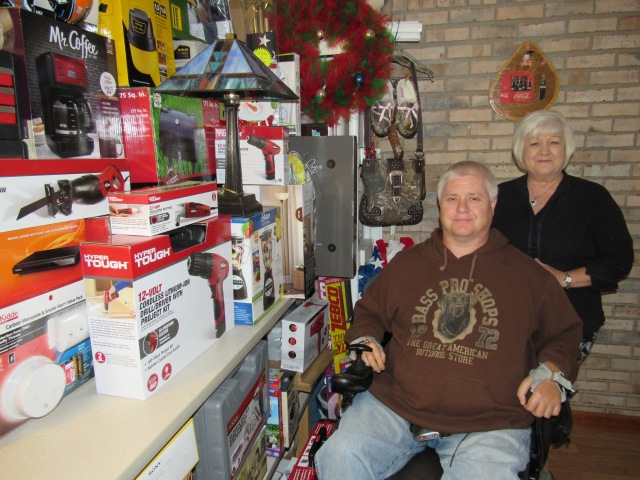 The special Christmas Party is held in the auditorium, where long tables of gifts are on display. Some gifts are available for “pick up,” while big ticket items are auctioned. Browning will give each veteran the same amount of “play” money to spend at the party. The marked Monopoly money helps them “buy” Christmas gifts for their families.

“The veterans get to bid and buy the gifts with their play money,” Mary Lee Browning said. “Believe me, this auction really gets heated. They have so much fun.”

There are also door prizes and Browning has a 32″ smart TV that a lucky veteran will win.

Tracy Browning serves as the auctioneer at the party. He said everyone has a great time and he loves working the auction.

In addition to Saturday’s party in Memphis, the Brownings will also host a special event at the VA Nursing Home in Kosciusko. On Dec. 9, at 1:30 p.m., they will have a singer lined up to sing Christmas carols and at 2 p.m., they will host Bingo to help give veterans a little “fun” money at Christmas, as well as candy and fruit.

Browning begins her fundraising campaign in early October. Montgomery County businesses know when they see Browning with her clipboard, she is working on donations for the Veterans Christmas Party.

“I could not do any of this if it wasn’t for my loyal and very long time wonderful people who donate each year,” Browning said. “I have been counting on them for 18 years and they always come through.”

“Mary Lee Browning is one of the most selfless women I know,” said Donna Pearson. “She works tirelessly all year to ensure each veteran and their families that attends the Christmas party held at VA Hospital in Memphis gets a gift!”

Pearson helps Browning with a Veterans Christmas Tree at “The Tracks,” giving residents the opportunity to bring a special gift and put under the tree for veterans.

This year, Pearson is doing a collectable penny fundraiser, for a $5 donation to the Veterans Christmas Party.

If you would like to make a donation for the Veterans Christmas event, stop by The Tracks in downtown Winona and speak with Donna Pearson.

This story was featured in the Dec. 1, 2016 edition of The Winona Times.