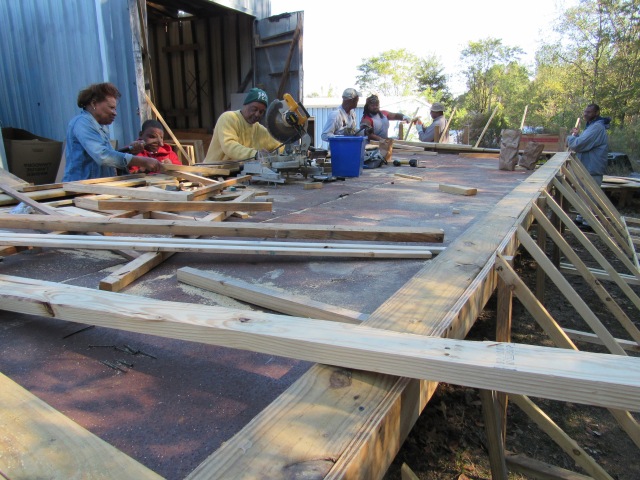 Members of Winona Baptist Church are busy putting together their surprise float for the 2016 Winona Christmas Parade. A few of the church members working on the project include: Luella Whitehead, Ariq Anderson, Glen Hobbs, Parrish Campbell, Atavis Campbell, Keith Brown and Kevin Brown. Artie Bibbs was also on hand for the project. (Photo by Gwen Sisson)

It has been in the works since July. The committee was formed and tasks were assigned.

But members of Winona Baptist Church will not tell their secrets as they prepare for the 2016 Winona Christmas Parade.

Not to worry. Glen Hobbs, the chief mastermind behind this year’s church float, said all will be revealed in time, but for now, all he can say is that “Winona is in for a few surprises.”

All Hobbs will say is that the mystery float goes along with the Winona Christmas Parade theme of “Christmas Around the World” and it will feature the nativity.

“It will be a non-traditional float,” Hobbs said. “We are coming together, working in unity and having fun.”

Hobbs said there is “no I, only we, us and ours at Winona Baptist Church. We are a unified church and we are unified in this project. It is a way for us to show what God can do when you come together in unity.”

Artie Bibbs, member of the Ad Hock Committee for Special Projects at Winona Baptist Church (as they laughingly refer to themselves) said everyone is excited about this project.

“I think everyone is having a good time and this is part of our ministry as we serve our church and our God,” Bibbs said. “And we are all having great fellowship together at this stage of the project.”

Since July, the group has organized and pre-built many aspects of the float. There is a group that pre-fabed much of the foundation, while another group was responsible for working on the lettering. Since Oct. 3, the groups have come together to work on the various elements of the float to begin putting it all together.

Atavis Campbell is one of several people working to put together the base of the float. He said working with his brother, Parrish Campbell, and members of his church family, has been a wonderful way to spend a few Fall Saturday mornings.

“I think we are all excited about the whole thing,” Luella Whitehead said. “I think I can speak for everyone when I say, we can’t wait for parade day!”

This story was featured in the Nov. 17 edition of The Winona Times.