“The Two Bettys” of North Winona Baptist Church have been hard at work getting ready for this week. 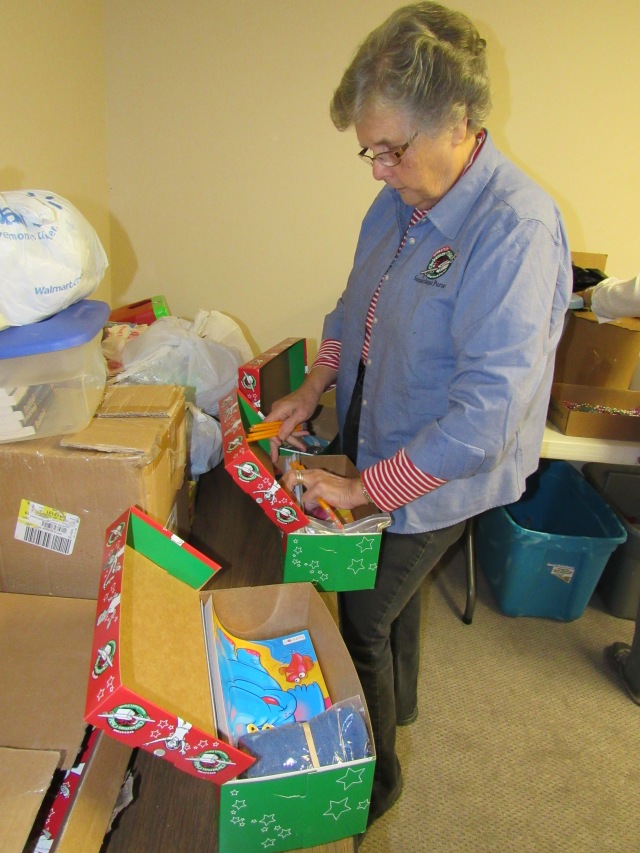 Betty Ferguson and Betty Knight work throughout the year to collect special gifts for the shoebox gifts, and during the middle of October and early November, the “Bettys” have a special room at North Winona Baptist where they put the boxes together and pray over each box. In each shoebox, they also place a card that lets the recipient know that they have been prayed for by members of North Winona Baptist Church. “The Bettys” believe in the power of prayer, for this project and in all aspects of their lives.

Operation Christmas Child is a global ministry where people of all age groups pack small gifts that will fit into a shoebox to bless children in need around the world. During National Collection Week, churches and groups collect the shoeboxes from their community. Churches, such as FBC Winona, will serve a drop-off locations the third week in November of every year. After Thanksgiving, thousands of volunteers, including volunteers from Carroll and Montgomery Counties, will travel to Atlanta, Ga. to a distribution center where they will inspect and prepare shoeboxes for international shipping. Throughout the year, National Leadership Teams train pastors and community leaders in over 100 countries to share the message of the Gospel and bless children through child-friendly outreach events. When the shoeboxes and missions volunteers arrive in their country, they are prepared to implement the follow-up discipleship program called The Greatest Journey, which is offered to every child that receives a shoebox.

Betty Ferguson and Betty Knight taking time out to pray for the children who will receive shoeboxes packed at North Winona Baptist Church, and throughout Montgomery and Carroll Counties. (Photos by Gwen Sisson)

The girls said as part of the area prayer team, they spend time each day to pray for the needy children around the world who will receive the special shoebox gifts. They pray for the volunteers who work for this special ministry through Samaritan’s Purse. They pray for the local collection center volunteers and those building boxes in their own homes and churches that are making a difference in the life of a child.

“I love this project because of the fact that we can be a missionary from our kitchen table,” said Betty Ferguson of Winona. “God know where these shoeboxes are going and the children are truly blessed from these gifts.”

Ferguson said she loves watching the films of the excited children receiving a shoebox produced by Samaritan’s Purse in over 100 countries around the world. 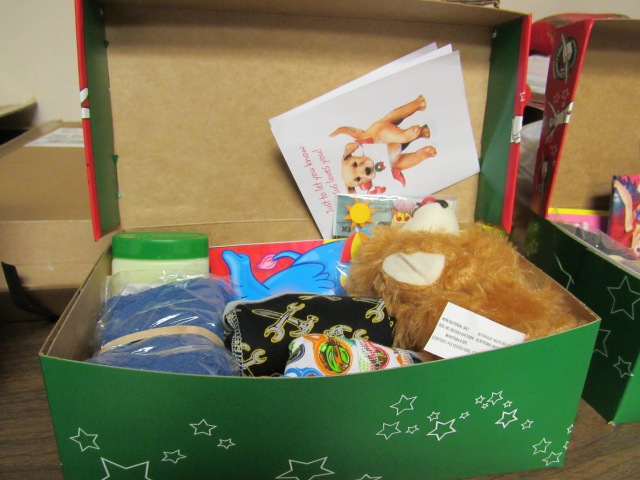 “I just love their excitement when they open the shoeboxes,” Ferguson said. “I love that the word of God is being given to each of the children and they are given the opportunity to go through a special discipleship program called The Greatest Journey, where they learn about having a relationship with Jesus Christ.”

Betty Knight agrees. She loves the fact that the recipients of the shoeboxes are prayed over many, many times before the shoeboxes reach the Atlanta, Ga. Distribution Center.

“All of us associated with the shoebox project pray over the shoeboxes, pray for the recipients and for every aspect of this project all of the time,” Knight said.

“The Bettys” believe in the power of prayer, and this project is no exception. They are passionate about the shoebox ministry and they pray others will be as excited and filled with this ministry as they are. They said they see the ministry growing locally each year. Ferguson said about 30 people from North Winona Baptist will go to Atlanta to volunteer at the Distribution Center – more volunteers than the church has ever had.

“It is such a blessing,” Ferguson said. “We love this project and we know that God is working through this. I love being part of it.”

For more information about Operation Christmas Child, go to www.samaritanspurse.org/operaton-christmas-child.