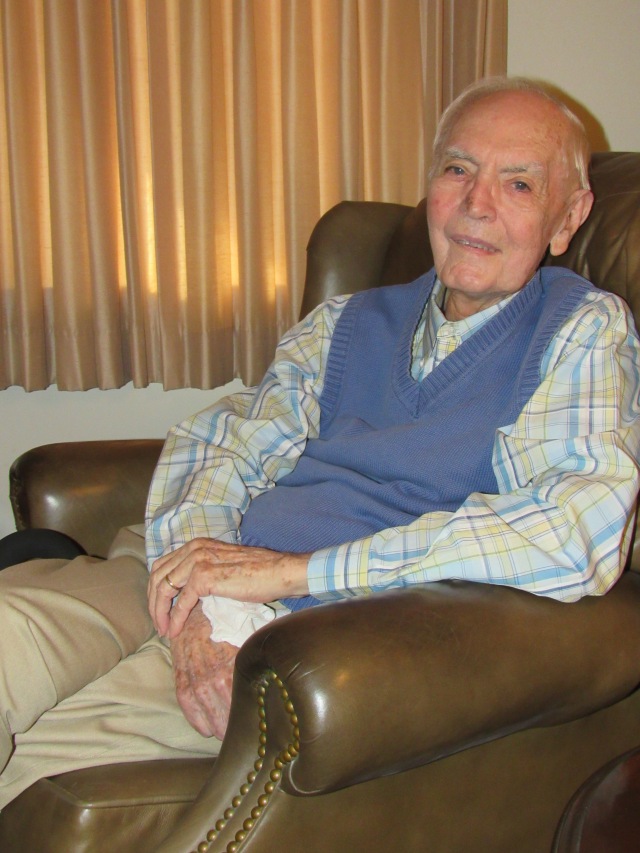 When Aubrey Boone of Winona looks back on that time of serving as an Air Force mechanic during World War II, he sees God clearly at work in his life.

Boone will turn 92 on his birthday in December. He says he has had a good life.

“Looking back, everything has been great,” Boone said. “I can see how God has been at work, taking care of me, giving me things I needed for the next step in the journey. Doing things that there is no way I could have ever done myself. I have been very blessed.”

In the Fall of 1943, Boone was 18 years old and had just graduated high school when he was drafted into the military. He was still living in his hometown of Holly Springs, and while he was aware of the changing political climate that was bringing the United States into World War II, he wasn’t anxious to be part of it.

“I was just an old country boy raised on a farm,” Boone said. “I had never been anywhere. It was a big change in my environment.”

He was sent to Miami Beach, Florida for basic training and after a few weeks, was encouraged to take a special test to become an airplane pilot. But God had a different direction for Boone. When he arrived for the test, the administrators decided that had enough pilots at that time, and he was assigned to be a mechanic on the ground crew.

For the few months he was in Miami, Boone and his friends would go swimming in the ocean at night after a long day’s work. But that was about to change.

In January 1944, Boone was transferred to a base in Kerns, Utah. He went from swimming in the ocean in December to being “cold, cold, cold” in Utah. He said for the first couple of nights, he thought he was going to freeze. He made sure he found two or three extra blankets from nearby bunks just to stand the cold nights.

From there, Boone spent a short time at Camp Kilmore in New Jersey in preparation for the two week journey to England. Boone had heard that if you would eat a big meal, you wouldn’t be sea sick. The day before they were to depart, he ate a big box of chocolate candy. He said the first day, it worked, but by the second day, the sea was so rough, he struggled. During the remaining two weeks on board, Boone only ate raw iced potatoes.

His crew traveled in a British Banana boat, with most of his crew below deck during the two week trip. They were below water level and there was a winding metal staircase to get to the upper deck of the boat. The candy must have helped, because he did not get sea sick. He and one other were not ill, but the rest of the crew were miserable. And because they didn’t get sick, it was their job to take the garbage cans up and down the winding staircase. Boone said that was one of the ways God was taking care of him.

They arrived in April 1944 and Boone was stationed primarily in England, on a base just outside of London. A short time after arriving, Boone had a little lesson about “buzz bombs.”

The Germans would send in “buzz bombs” which were gas-powered bombs. When the fuel would run out, the bomb would sputter and then drop wherever it played out. Because Magic Green Air Base was in route to London, it was a regular occurrence. For those who had been there a while, they knew what to expect and when to be alarmed. For newcomers like Boone, his first “buzz bomb” scared him to death. The floor of their sleeping quarters were lined with concrete blocks, and when he heard his first “buzz bomb” he was hitting the concrete, trying desperately to  get under the bed for protection. Those who had been there a while had a big laugh.

By June 1944, they knew the big German invasion was coming, they were just not sure when.

The day before the invasion, Boone remembers being told before they left for the day that they needed to go to bed early that night because the next day, they needed to paint black and white stripes around both wings and the fuselage of the airplanes.

“We laughed and talked about how stupid it was to be painting those stripes,” Boone said. “We thought they were just trying to keep us busy.”

Come to find out, the Air Force had received information that the Germans had retrieved some of their downed planes and may use them to confuse the allies. Pilots were ordered to shoot down any planes that did not have those stripes painted on them.

One plane that Boone especially remembers was called the “Swamp Rat.” Boone told his friends that one was a “Mississippi plane,” and at 7 a.m. that day, the invasion started and the “Swamp Rat” crossed the tower on a bombing mission. It got shot up and they were not able to fix it to go back up, but it survived.

“It was really amazing to hear all of the planes in the air,” Boone said. “There were several airfields outside of London and it was a continuous roar.”

Fifteen thousand people were killed in that invasion.

There was an instance when Boone was sent to a special two-week aircraft mechanic school, during the Battle of Bastogne. The weather was very foggy and the Germans were making progress in Belgium, close to where Boone was based. In trying to return to his base, weather delays caused many issues. Because his orders were to return via airplane, not by ship, he had to keep going back to wait for clearance. That lasted for a week or more.

While he was gone, the Germans were getting uncomfortably close to Roye Air Base. They had orders to get everything ready to burn in the event the Germans were successful. Boone said that was another way God was taking care of him.

“There were men out there that really thought they would be killed,” Boone said. “That never crossed my mind. I knew I was coming home.”

But he didn’t get to come home right away. Boone was then sent to Stuttgart, Germany.

There wasn’t much to do for an airplane mechanic in Germany, and Boone remembers having fun with several of the daredevil pilots during some of the downtime.

World War II pilots were fearless and were known for flying under bridges and through hangers. Boone said he crew had orders to close at least one end of the hanger at all times to deter pilots from flying through.

One time, Boone went up with his pilot friend, Clark. They were flying around that part of Germany, when they saw a German man working in a field cutting hay with a hand blade. Clark did a very low fly-by. Boone remembers the poor man laying flat on the ground and his eyes wide open. “It scared him good,” Boone said.

Boone said Clark tried to do the same thing to him once, but he ran when he saw Clark coming. He hid behind some gliders until Clark was safely on the ground.

Boone turned 21 years old in December 1945 and was back home in Holly Springs in February 1946.

“I say this often, I am so glad God let me live in the era that I did,” Boone said. “I couldn’t take what we are going through now. To see what is happening with the country we were so proud of.”

Boone said looking back, there were no negative comments about President Eisenhower or the leadership of the United States. People believed in they were fighting for a good cause, and that our freedom and liberties in America were worth fighting for.

“There was no discussion and the leadership was not questioned,” Boone said. “They had that much respect. God has blessed us as a nation. We were not capable of winning that war on our own. God did it. I truly believe that.”

Boone and his wife, Patsy, have been married for 65 years. They have a son, Alan Boone, a daughter-in-law, Cindy, a grandson, Gant Boone and his wife Jessica, and a great-great-granddaughter, Adele. Boone is retired from Bank of Winona and the Mississippi Baptist Foundation. He is a member and lifetime deacon at First Baptist Church of Winona.

“No one would believe all the many blessings we have received from God,” Boone said. “It has truly been a wonderful life.”

This story was featured in the November 11, 2016 edition of The Winona Times at http://winonatimes.com/winona-slideshow/service-his-country#sthash.wtF7sEwQ.dpbs