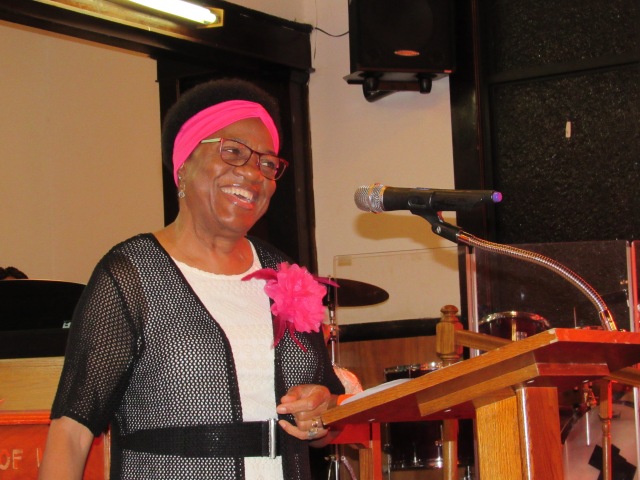 Carolyn Moore sharing her testimony of how God delivered her through cancer and how He continues to work today at the #PAINTWINONAPINK event held recently in Winona. (Photo by Gwen Sisson)

When Carolyn Moore got to an emotional point in her presentation, Shelton Moore got up to stand beside her. He put his hand on her back and the whole room teared up! (Photo by Gwen Sisson)

He walked beside her every step of the way.

There was hardly a dry eye at Winona Baptist Church when Carolyn Moore was sharing her testimony about her breast cancer journey for the Paint Winona Pink event. But when she spoke of her family’s unwaivering love and support and she started to become emotional, her husband walked up and put his arm around her shoulder to comfort her, everyone in the building was emotional.

Shelton Moore didn’t say a word. He didn’t have to.

“I thank God for my wonderful husband, who refused to leave the room during chemo, despite my insisting that he go downstairs or take a drive,” Moore said. “Thanks to my daughter and son who were with me every step of the way. I also thank other family, friends or anyone else that said a prayer, or even just thought of me in any manner.”

Cheryl Small said Moore was a positive Godly woman whom she had always admired.

“And she continued to do everything I had always seen her doing with a smile on her face,” Small said. “I didn’t even know she had cancer at first. It was quite a while when I heard she was going through chemo treatments for cancer. Her faith never wavered. She has been so strong.”

“God allowed me to carry on with whatever I needed, whether in the church or community with a smile,” Moore said.  “I would like for each of you to be encouraged! No matter what you may be going through, God is the answer! You may be struggling with health concerns, financial issues, family, jobs or church matters. Joshua 1:9 clearly states: “Be strong and of good courage; do not be afraid, nor be dismayed, for the Lord your God is with you wherever you go.’”

Moore said God was preparing her for her cancer journey more than 10 years ago, of course she didn’t realize it at the time.

In 2013, Moore was referred to the Breast Cancer Center in Starkville by her family physician, Dr. Katrina Poe. On Dec. 3, 2013 following several tests, it was official. She was diagnosed with Ductal Carcinoma, a form of breast cancer. She had a mastectomy on Dec. 27, 2013 and her attending physician and surgeon was Dr. Daniel H. Smith.

On Feb. 28, 2014, Moore had her first of round of chemotherapy at St. Dominic Cancer Center. Her oncologist is Dr. Quangzhi Qu. This treatment involved three different medicines, but Moore said  she was never sick following a round of chemotherapy, and for that she was thankful.

Exactly two weeks after the first round, on March 14, she began losing her hair. On Saturday, March 15, she shaved it all off.

“Because of my belief in Philippians 4:11, no pity party for me,” Moore said. “As life deals us lemons, we must learn to make lemonade. In other words, turn sour into sweet. Therefore I thought, ‘hmmm- no more perms, beauty shops, or hair rollers. What a relief!’ As a matter of fact, when those unaware of my situation would inquire about my hair, I would reply, ‘Oh, this is my chemo cut!’”

In April 2014, Moore developed an infection on her left thigh which may have been caused by an insect bite. She was hospitalized at St. Dominic for six days following a simple surgery to cleanse the area. Chemotherapy had to be postponed for at least a month. But that didn’t stop Moore.

There were many trips to Jackson with stays of at least three hours. Actually, she said she enjoyed going to Jackson for treatments because had  a chance to “handle some business” at Mama Hamils, Golden Corral, Picadilly’s, the Mall, even Krispy Kreme!

Moore completed her final round of chemotherapy in August 2014.

In October of 2014, Moore was blessed with enough hair to go without a hat. It was a memorable day.

Moore said she was diagnosed with cancer, despite having regular annual mammograms that have all had good results.

“It was not because of negligence on my part, you see I had been getting yearly mammograms like clockwork for many, many years,” Moore said. “ With that being said, Breast Self Exams (BSE) are also very important. I was the one who discovered that something was different, I thank God for that! Men and women need to get to know their bodies! Yes, I said gentlemen! There have been men right here in Montgomery County diagnosed with breast cancer.”

At one point, Moore was discouraged with her diagnosis. She said according to John 10:10, “The thief comes only to steal and kill and destroy. “

“He wanted to destroy my peace, my joy, my sanity, my faith, my everything,” Moore said. “But then, I had to remember the rest of that same verse, where Jesus reminds me that: I came that you may have life and have it more abundantly. God has been too good to me, so why stop trusting Him now?”

Moore said one of her favorite scriptures is Philippians 4:11-13, which simply means, “I have learned to be satisfied with what I have, and whatever happens because Christ is the one who gives me the strength I need to do whatever I must do.”

In February, Moore will be cancer-free for three years, a big milestone for cancer survivors. She continues with follow-up appointments and tries to encourage others at whatever stage they may be in their own cancer journey.

And Shelton is by her side every step of the way.

This story was in the October 13, 2016 edition of The Winona Times.