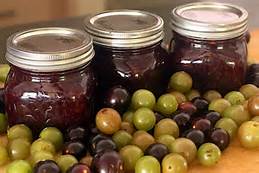 What could be better than muscadine jelly spread over hot buttered homemade biscuits?

We are getting near the end of muscadine and scuppernong season, and home cooks throughout the South have been making jellies, jams and sauces from “the fruit of the vine.”

Muscadines are the native Southern grape, ripening here in the South during the late summer and early fall months. Muscadines are the “purple/red grape” and they are rather large grapes, nearly the size of a golf ball, and dark purple in color that they are almost black, containing very large seeds and tough skins. Scuppernongs are the “green grape.”

Everyone said when choosing muscadines, select those that are uniform in shape and color and that are free of soft spots or other blemishes. Be sure to store muscadines unwashed, in a shallow container in the refrigerator for up to one week for the freshest fruit.

Janie Fondren of Stewart was so sweet to share a large bag of scuppernongs from her vines and the instructions from the Sure Jell Premium Fruit Pectin box that most people go by when they go to make muscadine or scuppernong jelly. She and Aunt Margie Pepper use the grape jelly recipe for making scuppernong jelly.

Betty Sparrow says she makes muscadine jelly every year and also uses the grape jelly recipe in the box of Sure Jell, which calls for 5 ½ cups of prepared juice and 3 ½ cups of sugar.

“I think the secret is in how you get your juice,” Sparrow said. “I use as little water as possible and boil the muscadines until they are popping and soft, then I cool it down so I can handle the stuff. I squeeze the muscadines with my hands until they are all pretty much mush, then strain the mush through four layers of cheesecloth to get the juice out. I twist the cheese cloth around the ball of mush to get out all of the juice I can. The stronger the juice, the better the jelly.”

Gina Vaughn of Winona said she uses a recipe from www.deepsouthdish.com to make her muscadine jelly. She said it takes about three quarts of muscadines (12 cups).

In addition to jellies and jams, there are so many ways to make the muscadine season extend year-round. Janie’s daughter, Myra Hill, said her mom also makes scuppernong syrup to pour over waffles and ice cream. Muscadines and scuppernongs are also used in pies and, if you are so inclined, muscadine wine.

A few years ago, I did a story about Reese Orchard in the Sessums Community outside of Starkville. The orchard featured a “U-Pick” muscadine and scuppernong farm that had over 20 different varieties. My favorite was a scuppernong that was a pink-ish green, very sweet fruit named “Cotton Candy.” In that story, Amanda Goodwin was a dietetic intern working at OCH Regional Medical Center, who shared many of the important anti-oxidant properties of muscadines and it is considered a “superfruit.”

“Muscadines have the most powerful antioxidant capacity of any other fruit, surpassing even blueberries and pomegranates,” Goodwin said in the article from 2011. “Antioxidants are important because they help rid our bodies of free radicals which cause cell damage.”

Goodwin said muscadines are also naturally disease-resistant due to a chemical compound called “reservatrol,” a substance also found in red wines. Reservatrol may help reduce the risk of coronary artery disease and lower cholesterol,” Goodwin said. Muscadines contain no fat and no cholesterol, and minimal amounts of sodium. According to Goodwin, one cup of muscadines yield 60-100 calories (depending on skin color, lighter skinned being slightly less in calories) and they are rich in vitamin C, fiber, and potassium.

What a good reason to make a pie!

This column was published in the October 14, 2016 edition of The Winona Times and The Concervative.