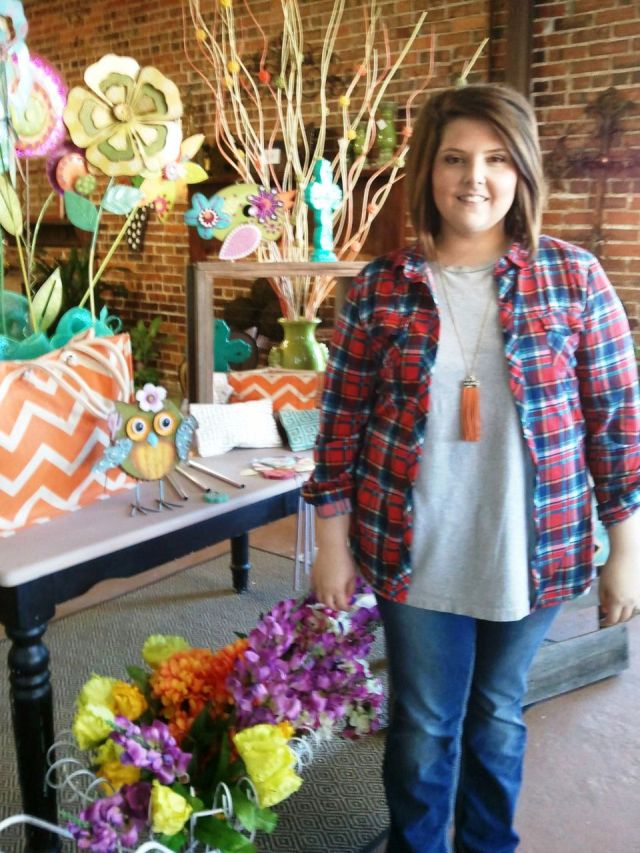 Mallory McCain of Teacups and Tuplips in downtown Eupora said she loves her work for many reasons.

I love that I get to work with brides and families preparing for such a special day,” McCain said. “For families who have lost a love one, arranging their funeral flowers is special because I feel like it’s something I can do to brighten such a sad time.”

But she also loves her customers and enjoys seeing how happy and surprised people are when receiving an arrangement “just because.”

“Flowers brighten my day every single day and I love sharing that with others,” McCain said. “Teacups and Tulips is unique, I believe, because I offer fresh ideas and put my all into a small arrangement to say thank you to someone as well as  designing a wedding. Because it’s really not a job to me, I enjoy everything I make and I hope that shows in my work.”

McCain’s passion for flowers developed in college, but has been nurtured through family over the years. She took basic floral design as an elective at Mississippi State University.  Her college roommate also was taking the class and she enjoyed it so much, she didn’t even mind the class meeting at 8 a.m. She wanted to learn more.  She signed up to take permanent botanicals and flower shop management the next semester and knew that’s what she wanted to do.  McCain said all of her instructors were great and made each class a lot of fun.

She did a semester internship at Flowers by the Bunch in Starkville where she learned the business side of a flower shop. After working there three and a half years, she knew this was her calling.

McCain said she decided to open Teacups and Tulips a little over a year ago because she wanted to share her love for flowers.

McCain’s family is originally from Eupora. Her parents moved to Starkville when they were first married and she grew up there. She  wanted to come back to Eupora to open her shop because she likes the feel of a smaller town. And she has a little personal history with the building where Teacups & Tulips is located in downtown Eupora –her grandparents, Lowell and Louise Gibson, actually met in the flower shop building. Her grandfather had just returned from the Air Force and her grandmother was a waitress there, making the place a little special.

Her grandmother, Jeanie McCain has also worked at numerous flower shops and gift stores in Webster County. McCain said her grandmother’s love of flowers has had a big influence on her.

“I think that’s why my business is so special to me because it has really been a family project,” McCain said. “I couldn’t have opened without the support and encouragement of my family.”

Last weekend, McCain married Kacey Skelton of Bellefontaine. Her parents are Rodney and Gay McCain of Starkville, but they are originally from Tomnolan. She has one brother, Brent McCain. She is a member of Tomnolan Baptist Church and the Eupora 20th Century Club.

“Mallory is such an artist,” said Eupora Mayor Dan Burchfield. “She is a creative entrepreneur, and her florist and gift shop add a whole new dimension to downtown.”

Monti King of Flowers By The Bunch in Starkville said McCain is a “go getter.”

“She is young and willing to step out of the box to get business,” King said. “She started her business from the ground up and has such a passion for what she does. She loves flowers and everything about the floral industry. She is the type of designer that can completely adjust with what ever the situation calls for. She is very flexible and willing to work with any design challenge that comes her way. She is a joy to work with and as for her future I believe she will be extremely successful, because of her willingness to adjust with any situation. Please feel free to reword this to make it sound professional.”

For more information about Teacups and Tulips, find them on Facebook or at the storefront location 83 N. Dunn Street, in downtown Eupora. Give them a call at (662) 258-2005.

See this story in the June 24, 2015 edition of The Webster Progress Times at http://websterprogresstimes.com/2015/06/24/flowers-and-family-are-a-growing-passion-2/