Rev. Matt Tucker said portraying Jesus in the play, “His Last Days” at Kosciusko First United Methodist Church for the past several years, has been impactful.

“Try carrying a cross, literally, while some high school kids whip you,” Tucker said. “It will make you realize this was nothing compared to what he actually went through for loving us. He is compassion, which means ‘that which you will suffer for,’ because studying about the crucifixion, I realized there I no more painful of a way to die than that and Jesus endured as an obedient servant of God’s will for our lives. That is awesome!”

For Tucker, it has been difficult as an actor thinking about Jesus’ reactions to different situations in the play, such as his facial expression when Judas betrays him, or when Peter denies him three times, or how to portray his suffering on the cross.

“I struggle with these  parts every year but I also ask God to allow me to be His vessel before every show so He takes care of me,” Tucker said.

Tucker is the pastor at Bellefontaine UMC and Lebanon UMC, but grew up in Kosciusko and recently served as their youth pastor for many years.

The 30th annual “His Last Days: The Passion Play” will be presented by Kosciusko First United Methodist Church in Kosciusko, the three nights prior to Easter, April 2, 3, and 4 at 8 p.m. on the grounds of the church. There is no cost for admission, no tickets are required, and no reservations are necessary to attend the performance.  A nursery is provided. Parking for vehicles, including vans and buses, is conveniently located near the church grounds.

The live outdoor drama which portrays Jesus’ betrayal, trial, crucifixion, resurrection, and ascension begins in front of the church on Washington Street and progresses onto North Natchez Street where the last scene, the Ascension, takes place. Visitors need to bring a lawn chair or blanket.

The script was written by the late Rev. Charles Wiggers during his pastorate of the church. The production is currently under the directorship of Diane Grey, Joe Doty, and David Casteel. Terry Jones serves as production director.

During the one hour production, actors portray Jesus’ last days, as it goes from the Last Supper to Gethsemane to the betrayal of Jesus to the trials, punishment, crucifixion, resurrection, and finally the ascension and Great Commission.

People from throughout the Kosciusko community work together to help First UMC’s annual production of “His Last Days: The Passion Play.” The cast is just short of 100 people and there are also 25-40 people working behind the scenes. 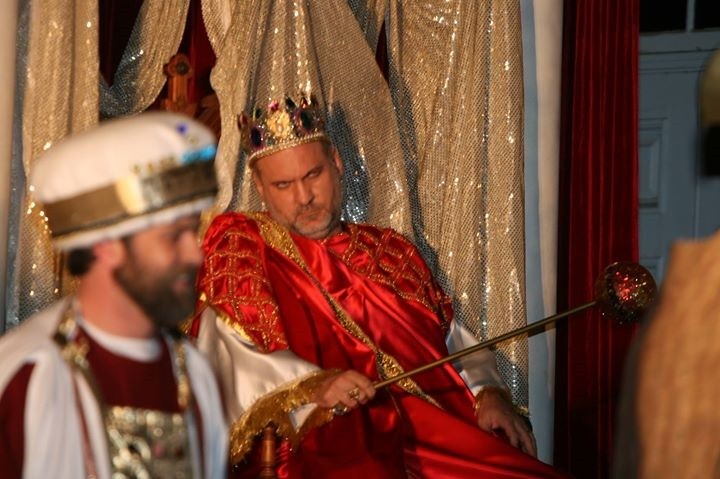 “There are a lot of things I really enjoy about this production, but one of the main ones is how it captivates young people,” Tucker said. “I have seen so many young people in tears and in the sanctuary after the play is over.”

Diane Gray, director of “His Last Days: The Passion Play,” said many of the cast have performed in the drama every year and some in the very same roles.

“These individuals, who have never seen the drama from an audience’s point of view, continue to give their time and talents as they fulfill the church’s mission statement to learn the story, live the story, and tell the story of Jesus Christ,” Gray said.

Gray said the drama takes on a life of its own as sound and lighting engineers, makeup artists, hair stylists, costume designers, and seamstresses utilize wardrobe and props housing pottery, shepherd’s hooks, crowns, elegant robes, and everything anyone needs to assist in making the production more authentic and realistic.

“The audience is offered a sense of what Christ experienced for us all during His last days,” Gray said. “The logistics of the drama draws the audience into the action as they become the crowd who followed Jesus and witnessed his crucifixion.”

Starkville District Superintendent of the Mississippi Conference of the United Methodist Church, Dr. Embra Jackson, said having served as a pastor in Kosciusko many years ago, he has always found the outreach ministry of the drama, “His Last Days” a great way to connect the church with the community.

“I also find that it is a wonderful way to help tell the story of the last days of the life of Christ,” Jackson said. “The actors and set are so realistic and one is visually transported to Jerusalem of 2,000 years ago.” 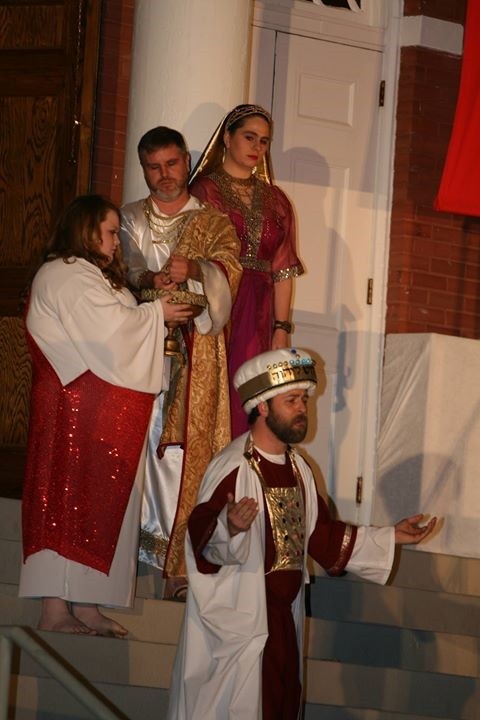 Dr. Don Patterson, pastor at First United Methodist Church of Kosciusko, said he wishes every pastor had the opportunity to experience what he has experienced over the last seven years.

“First, this passion play is just that; the congregation, cast, and crew are truly passionate about this ministry,” Patterson said. “It is the nexus point for everything we do at Kosciusko First Church, and every member of this congregation absolutely pours themselves into this annual outreach effort. Second, this is the only major congregational ministry initiative I’ve ever experienced where I had absolutely no responsibilities.  You can’t imagine what a gift that is to a pastor. I’m privileged to be ministered unto throughout the entire Holy Week preparation and presentation process.”

Patterson said as he has walked through the crowds in attendance at the three annual performances he has seen, there are people who have the entire script memorized from watching the play over its 30-year history.

“I’ve watched mothers cry tears at the crucifixion of Christ,” Patterson said. “I’ve watched little children in absolute awe over the Roman guards and their weaponry. And I’ve watched men hang their heads in humility and shame at the realization that ‘we’ did this to Jesus.  Moreover, this entire enterprise is a case study in just how serious we Mississippians are in our understanding of the Truth of the Gospel.”

For more information about the performance, go to http://www.fumckosciusko.com or call the church office at (662) 289-1412.

See a version of this story in the April 8, 2015 edition of The Webster Progress Times at http://websterprogresstimes.com/2015/04/08/his-last-days-an-impactful-experience/