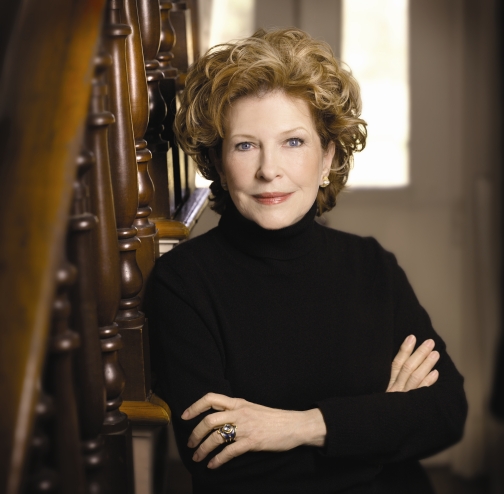 Cynthia tells Father Tim to “go and be like the butterfly… Butterflies have a very short life span. If they’re ever going back to Mississippi to settle certain issues of the heart, they have to hop to it. And enjoy the trip while they’re at it, of course.”

Her book, “Home To Holly Springs” fills in a lot of blanks in Father Tim’s past that was not addressed in her wildly popular Mitford series of Christian fiction based around the life of the lovable Episcopal priest. This series begins in Mississippi and takes fans to Ireland and England as we “settle certain issues of the heart.”

Karon has had to “settle certain issues of the heart” in her own life in order to create the world of Mitford we have all come to love and enjoy. Karon said she was 42-years-old when she came “to the complete end of herself…there was nowhere else to look but up.”

She was raised by her grandmother who made sure she was in Sunday School and church, but the love of the Bible and the love of God never quite made its way into her heart.

“I was very rebellious and I broke all the rules,” Karon said. “I was a pretty lost young woman. I tried different things and nothing really ever worked. I knew there was a God. I knew I believed that there was a God, but I just didn’t want to know about Jesus Christ. I thought, ‘what was that all about anyway? The cross and the blood?’”

So at the age of 42, she came to a difficult time in her life and had no where else to go. She fell on her knees and begged God to save her. She really didn’t know what that meant, but she didn’t care.

“All I wanted was to give up my agenda, which never worked, and I wanted His,” Karon said.

The next morning, she woke up and wasn’t sure if anything had really happened. Nothing was different. No audible voices, no bolts of lightning. Nothing. Nothing except agony and surrender.

“And I thought, ‘well, I guess nothing happened’ but you see, my life really began to change and I noticed it,” Karon said. “It began to change in a pretty dramatic way and also in very subtle ways. A real pinch I was in–God released it and made me able to resolve it. That was really His first demonstration to me that He really was alive and real and really did love me.”

“The craving is the problem,” Karon said. “It’s the craving that’s the problem with all sin. He took the craving from me and I have never looked back. I have not smoked another cigarette since. That was just another demonstration of His grace and the fact that He is alive and active in my life. In the life of me, who didn’t even deserve to have Him notice me. I was discovering that He loved me.”

God was at work in her life long before she came to a saving knowledge of Jesus Christ. At the age of 10, God had placed it in her heart that she would one day become a writer. She worked in advertising for many years and had a special gifting for writing and developing artwork. She won many prestigious awards, but she knew that was not her calling. For two years, she prayed that God would show her what to do. It was a scary time. Financially, advertising paid well, and many writers often did not seem to make significant financial gains off a book. After two years, God seemed to say to “go and don’t look back.” And she didn’t look back, but she went through what she describes as “a long hard valley.”

She moved to the mountains of North Carolina to be closer to her brother. She cut her lifestyle in half and bought a very inexpensive little cottage and set about trying to write a book and discovered that she had nothing to say! It was a very scary time. She did some freelance advertising writing, thanks to the reputation she had built over the years. But due to a serious economic recession throughout the United States, it was difficult to find other types of writing work at that time. She struggled for about two and a half years, and then God gave her an image of a village priest walking down the street.

This short, overweight, balding, well-loved priest, was the vision behind her first book, “At Home in Mitford.” Writing from the perspective of a man who would know all the secrets and important happenings in the community was not a difficult task for Karon. She said she takes writing advice from the late Eudora Welty who said it was important to get into the heart and mind and the skin of a character, regardless of whether they are male or female, old or young, black or white–it doesn’t matter. Writing is about imagination. Writing is about being able to transport yourself into the world of the character, so that you can transport your readers.

“Father Tim is the only one in the village who is going to be privy to almost everything–every confidence, every grief, every joy,” Karon said. “He has one pair of eyes, and through that one pair of eyes, he can observe dozens and dozens of people. That’s not true of everybody. I needed someone who could observe and do something with it, to be transformative in a way. It needed to be a priest and it needed to be a man.”

Karon said “Home to Holly Springs” is her favorite book so far. She loves this book “very, very tenderly.” It was the hardest book she has ever written, because she was writing about a real place and trying not to offend. She said she has always known Father Tim was from the South, but not from North Carolina. Looking over the Southeast, nothing seemed just right.

She had never spent much time in Mississippi, but she knew her character knew Mississippi. Looking over the state to find Father Tim’s hometown, she knew she wanted a town that “was musical to the ear…that had a beautiful sound, a ring to it.” Her search lead her to Holly Springs.

After the ninth novel in the Mitford series, she was comfortable with Father Tim as a main character, and she wanted to launch a new series, uncovering what went wrong in the relationship between Tim and his father. Karon said we just didn’t know much about what made him the man you see today after nine novels. She decided she would have to take her readers back to where Father Tim was born and grew up and figure it all out. And that is leading us to the new series, beginning with “Home to Holly Springs.”

Karon said her message is simple, “God really does love us,” and what better way to express that message than through a wonderful, well-loved priest who is coming “Home to Holly Springs.”